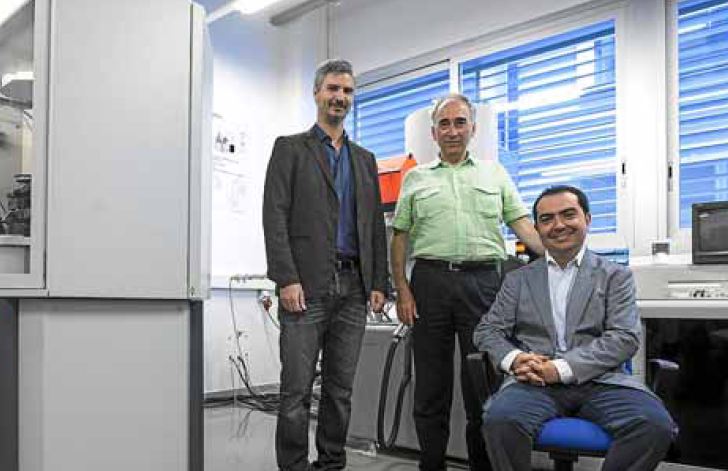 The Institute of Nanoscience of Aragon (INA) of the University of Zaragoza with nanoScale Biomagnetics and Nanoimmunotech, two spin-off companies emerging from Aragonese campus will participate in the HelloKit project which proposes the development of an innovative tool based on the technique of controlled drugs releasing by inductive heating for the development of new cancer therapies and other types. This technique combines nanoparticles, nanogels, antibodies, heat and magnetic field searching for a more efficient drugs delivery with less toxicity to the body and a better quality of life .

The Institute of Nanoscience of Aragon plays a key role in the Hellokit creation, one of the research projects which has been selected and funded (INNPACTO program) by the Ministry of Economy and Competitiveness (MINECO). This technological development is an example of synergy between universities and technological companies which are born of its scientific activity. HelloKit will be developed by a consortium in which besides the Aragonese partners, Catalonian company named Oryzon – Genomics and Prince Felipe Research Center are involved.

Physics, electronics, molecular biology and nanotechnology will be complemented in this cluster, whose ultimate goal is to make available to the pharmaceutical, biotechnology and academic groups a product accelerating and providing new experimental evidences of new clinical treatments based on controlled drug releasing techniques by inductive heating.

HelloKit will develop a set of electronic devices for field application, a set of different nanoparticles, antibodies and biochemical agents which supplied to the client / investigator will provide to experiment with the desired type of drug, -obviously, within a compatible spectrum- without need to go through the development stage of the magnetic field devices, nanoparticles, antibodies, binding biochemistry , etc. . That is to say, a kit for developing new therapies.

The spin off company, nanoScale Biomagnetics, directed by Nicholas Cassinelli, leads the project consortium, and develops the equipment generating the magnetic field, based on its experience in inductive heating experiments of nanostructured materials. This company was a response to the real needs of hyperthermia research group of the INA, which works on nanoparticles synthesis and characterization, absorbing the magnetic field and transforming it into heat.

Nanoimmunotech, the University of Zaragoza spin-off company , will participate in this project by providing technology to link together all these versatile elements (antibodies, nanoparticles … ) , using bioconjugation technology. Nanoimmunotech, directed by Ruben Santos, is specialized in the design, development and production of nanoscale systems by binding bioconjugation to nanostructured materials or other items, such as biomolecules or drugs.

In this consortium is critical the role of the University of Zaragoza Institute of Nanoscience of Aragon (INA ) , led by Professor Ricardo Ibarra, and represented in this case by the Magnetic Hyperthermia Group, led by Professor Gerardo Goya – and functionalization Group – led by researcher Jesús Martínez de la Fuente – , working since 2003 on research and development in the field of nanoscience and nanotechnology.