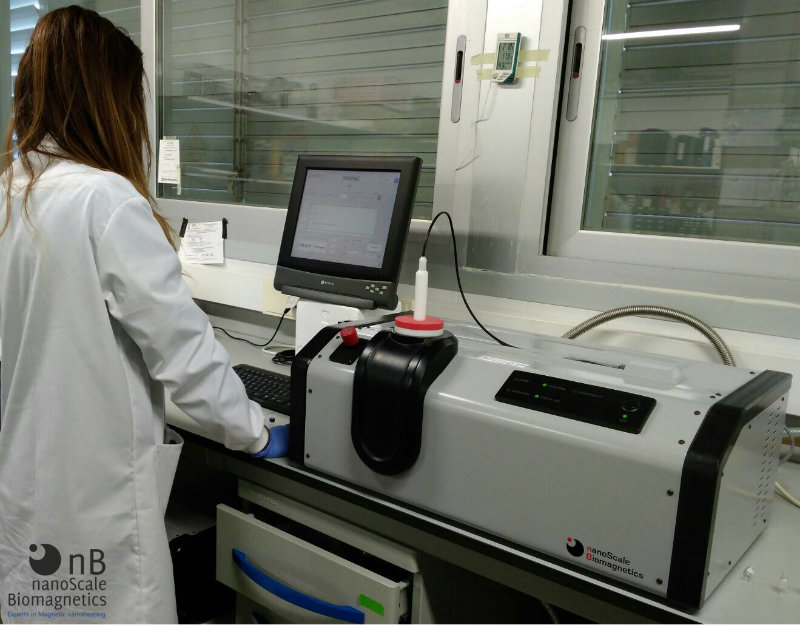 Posted at 15:48h in Magnetic Hyperthermia Papers, News by nbnanoscale

If you are considering getting instrumentation for magnetic heating of nPs, magnetic hyperthermia or magnetically controlled drug release, we encourage you to read on.

Heating nanoparticles using alternating magnetic ﬁelds has become increasingly more commercially relevant every year so in the spring of 2011 nB introduced the concept of the DM100 Series product to the scientiﬁc community; our intention was to learn from the scientist’s requirements and to make instrumentation that evolves with its users.

From the original DM1 applicator for calorimetry, and all the way down to the current catalog of the new D5 Series that enable calorimetry, local thermometry, thermal imaging, drug release, microscopy, atmosphere control, temperature control, thermalization, heartbeat control for in vivo experiments, multiple probing, etc, our products have proven nB’s commitment to quality, reliability and, above all, constant innovation. The new D5 Series is much more flexible and expandable because you can run different experiments just by changing CoilSets and Accessories without the need and complication of getting a new device.

In this document, we’ll brieﬂy comment on a handful of scientiﬁc publications that users have shared with us which have been using DM100 and D5 instruments, as well as some in-house applicators and accessories.

The most popular study in magnetic heating of nanomaterials is the measurement of the SAR (Speciﬁc Absorption Rate), also known as SPA (Speciﬁc Power Absorption). This parameter represents the power dissipated by a sample when it is exposed to a given applied magnetic ﬁeld. The samples studied are mainly magnetic colloids, usually water based (but can also be in organic or acid solvents). SAR is expressed in [W/g], and depends on concentration, solvent, ﬁeld frequency, ﬁeld intensity, ﬁeld harmonic composition, aggregation for a given type of nanoparticle.  Composition of the nanoparticles as well as size and shape also aﬀect SAR.

Most of publications dedicated to the study and report of SAR values of magnetic colloids indicate calorimetry as the method of choice. This method assumes that all the energy dissipated by the particles is ﬁnally transformed into heat which once dissipated across the sample’s liquid base solvent, induces a rise of temperature that can be measured. In conditions of perfect insulation, the dissipated heat energy can be easily calculated by means of the experiment duration, speciﬁc heat of the base liquid and the change in temperature of the colloid. The SAR/SPA of the particles will then be calculated from the colloidal concentration and the parameters of the ﬁeld.

This procedure, although apparently simple, presents several challenges. In the initial years of scientiﬁc experimentation, the diﬃculty related to getting reliable, and particularly, repeatable results became evident as more and more papers were published. When nB designed the first applicator for calorimetry, we were already aware of the crucial role that the quality of the magnetic ﬁeld instruments, measuring probes and thermal facilities played in accurate SAR determination. nB has collaborated actively with customers and leading researchers.

The inﬂuence of particle size on SAR was studied and reported by Goya, Lima et al.[1] in 2008 using the ﬁrst version of DM1 developed in collaboration with the Institute of Nanoscience of Aragón. In 2009, González Fernández (from CSIC-Madrid) et al. reported their work on optimization of size, shape and magnetic properties for improving SAR[2].

In the area of drug release, Hoare et al. developed a magnetically triggered composite membrane for on demand release in 2009.[5], and after optimization, in 2011, they reported again a thermoresponsive reversible membrane showing on-off drug release with an alternating magnetic field.[6]

One original contribution to what today is being called nanothermometry was made by Dias et al. when a method for using DNA as a molecular probe was presented in 2013.[7] The group comparing calculations and thermal experiments with the data collected with DM1.

Guardia et al. developed and published in 2014 a method for manufacturing an interesting kind of iron oxide nanocrystals with high SAR values with great potential for cancer therapy.[8] Furthermore, focused on core-shell type of particles, Zamora-Mora et al. characterized chitosan@iron oxide nanoparticles for magnetic hyperthermia..[9] Chitosan is one of the most frequent materials in core-shell particles due to its biocompatibility.

In 2015, Carregal-Romero and co-workers  developed a microcapsule loaded with MnPs capable of releasing a molecular cargo applying an AMF..[10] During this year, Beatriz Sanz,PhD in Chemistry and nB’s lab specialist, has authored several papers in the hyperthermia research area framework. One of her first works published was focused on studying the long-term stability of Magno, nB’s own magnetic colloid,   for magnetic heating, showing the impact of colloidal stability against precipitation and agglomeration to preserve the heating efficiency of the synthesised nPs for long time.[11] Materia et al. also presented a protocol to control the aggregation process during the synthesis due to the importance of this effect over the SPA values..[12] Another interesting example is the work leaded by Dr Seemann et al. on the properties of FePt core shell nPs..[13] Also, Boskovic and co-workers reported the analysis of the influence of size distribution and the AMF applied in SPA presenting a mathematical model to explain the data.[14]

In 2016, Casula et al. reported a simple method to enhance the magnetic properties of iron oxide doping with manganese, and they evaluated the effect over magnetic heating too.[15]

Mazario and co-workers reported in 2017 the mechanism of heat dissipation of iron oxide nPs functionalized with Human Serum Albumin (HSA) showing that occurs through Néel relaxation.[16] At the same time several groups presented the effect of optimize parameters such as crystallinity, size, structure and magnetic properties during the synthesis process over the SPA value.[17][18] Moreover, Hai and co-workers presented an hybrid system to induce magnetic hyperthermia and photothermia.[19]

In 2018 and 2019, the number of papers reported with DM1 increased leaving us interesting works which are presented here. Bañobre-López et al. presented a magnetic ceramic system suitable for curing and annealing integrated circuits by AMF.[20] Jovic Orsini et al. showed that the heating rates depending on the final particle size which was controlled keeping constant concentration of Fe ions in solvent during the synthesis process.[21] Also, magnetic composite membranes have been reported for magnetic hyperthermia applications.[22] Still on the issue of heterostructures, Vita et al. reported Au@Fe3O4 nPs providing magnetic and plasmonic properties to be used for magnetic hyperthermia and photothermal therapy.[23] Just as the last case, Leon-Félix and co-worked reported in 2019 Au decorated MnPs designed for magnetic hyperthermia.[24] Furthermore, there are some groups seeking to control the mechanism of heat generation fabricating core/shell nPs[25], investigating the effect of metal substitution for iron in nPs,[26] [27][28] or studying the impact of the organic coating on MnPs.[29]

In addition, the first work performed with a D5 Series setup was published in 2018. This article reported the synthesis of core@shell nPs (Fe@FexOy) to prevent oxidation, and they obtained several sizes that were characterized with Driver G2 obtaining the best SPA value of 660 W/g for nPs with 18 nm.

Our range of instruments have been designed to fulfil the needs coming from every potential lab experiment regarding magnetic heating of nPs. In particular, DM2 and DM3 as well as D5 Series specific CoilSets are focused on in vitro and in vivo procedures. More than a dozen teams are already running preclinical procedures and biological validation using our equipment. Research groups have already published some promising data coming from the operation of these instruments (DM2 and DM3).  Other researchers have managed to use DM1 for bio samples, like cells in suspension.

Functionalization is one of the most important areas of interest for researchers using magnetic heating of nanomaterials. From release to labelling or just biocompatibility, many papers have addressed this task to help save the gap between the pure magnetic material and the bio application. In 2015, Soares and co-workers evaluated the influence of two different stabilizers on the heating ability and checked their in vitro toxicity.[32] Radovic et al. reported the in vivo evaluation of multifunctional Y-labeled MnPs for cancer applications to be used lately for magnetic hyperthermia.[33]

In 2016, Sanz and co-workers demonstrated the need for in silico design via mathematical simulation to design the optimal MnPs to maximize their heating effect under the influence of an AMF.[34]

In 2017, the number of papers reported using some of the devices designed by nB increased. Sanz et al. has used nB`s magnetic colloid Magno to study the cell toxicity comparing magnetic hyperthermia to exogenous heating showing a difference up to a maximum of 45% at 46ºC of temperature.[35] In the same way, Calatayud at al. presented the effects of both heating methods on a glial micro-tumour phantom.[36] Furthermore, Mazuel et al. showed that a gold shell coating prevented the intracellular biodegradation of MnPs to maintain their magnetic heating ability.[37]

The design and development of new nanomaterials for drug release activated by an AMF is increasing for the last few years, Cazares-Cortes et al. has worked with the release of anticancer drug doxorubicin from hybrid nanogels that were analysed in vitro and intracellular conditions resulting in increasing twice the release applying an AMF. And in a similar way, Criado et al. has tested the use of thermomagnetic polymer films as heating devices for magnetic hyperthermia resulting in an 85% reduction of cell viability obtaining promising new options for the treatment of small and superficial tumour lesions.[39]

In 2018, Lak and co-workers presented a large heating reached for 23 nm nPs under intracellular conditions, demonstrating the impact of Fe2+ deficiencies and structural defects in the crystal lattice.[40] Vilas-Boas et al.  presented the in vitro results of functionalized MnPs to combine a cytotoxic effect to sensitize  the cancer cells, and ensure lethal temperatures reaching when the tumour is placed under an AMF.[41] Also, a new environment-friendly synthesis route to produce MnPs from plant extracts have been reported showing their efficacy to induce cell death under the influence of an AMF.[42] Beola and co-workers have used DM3 setup in order to establish a relationship between the MnPs concentration and the cell death mechanism using 3D cell model.[43]

The increase in the number of papers based on magnetic hyperthermia let us read the first in vivo papers obtained with DM3. Guisasola et al. presented in 2018 the tumour treatment in vivo mediated by iron oxide MnPs embedded in a mesoporous silica matrix and coated with thermoresponsive polymer which release Doxorubicin.[45] Also, two articles have been presented comparing the effect in vivo of magnetic hyperthermia and photothermal therapy.[46][47]

Since the new D5 Series is relatively new, results coming from its users are yet to be published by the researchers.

This document was mainly written thanks to the collaboration and support of the authors of the cited works. Even when no protected content is shared here, the authors were kind to communicate to us about their activities and publications. Many of them are close collaborators of ours, sharing research projects and products development. We know that many other researchers in America, Europe and Asia are getting more and more data using our new D5 Series systems.

We are always pleased to know about what our instruments are being used for, so if you are one of our users and would like to share your experience with us we will be happy to feature your achievements in future editions of this review.