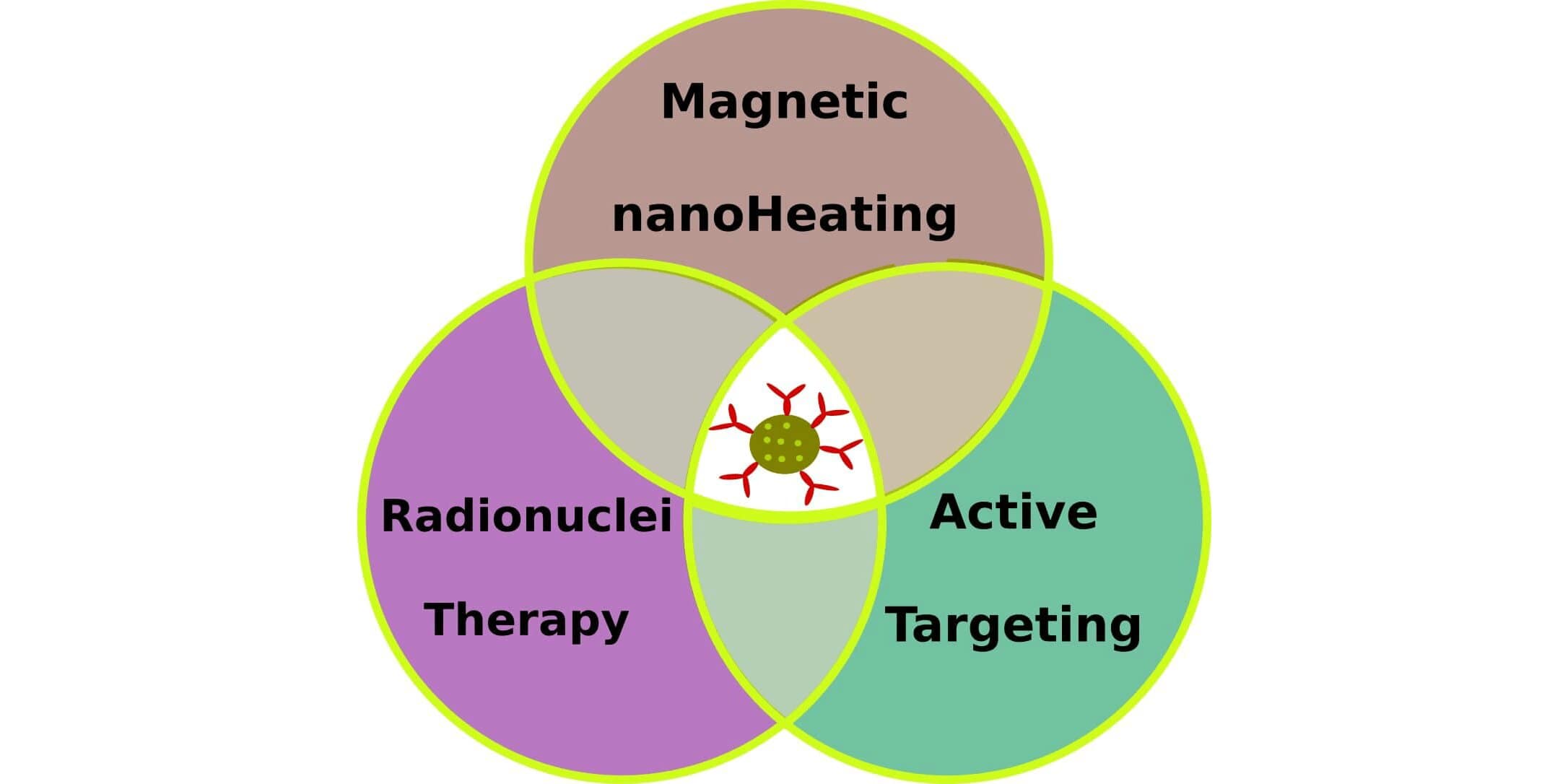 Posted at 12:33h in Magnetic Hyperthermia Papers by nbnanoscale

Professor Krysinski and co-workers have recently reported two articles describing two kinds of nanoparticles as platforms for multimodal anticancer therapy. These iron oxide-based nanoparticles doped with radionuclides were conjugated covalently with a monoclonal antibody which recognizes some cancer cells as can be observed in Image 1. They used Trastuzumab as monoclonal antibody that identifies the human epidermal growth factor receptor 2 (HER2). HER2 receptor is overexpressed in some types of cancers, as breast or ovarian. Therefore, this bioconjugation improves the internalization of nanoparticles to the cancer cells cytoplasm and increases their cytotoxicity.

Gawęda and co-workers presented a system based on iron oxide nanoparticles (NPs) which was modified in their core with holmium(III). Depending on the amount of Ho3+, their magnetic properties were modified. They pretended a multimodal action by simultaneous radionuclide and thermal therapies. In addition, these NPs were conjugated covalently with trastuzumab (Herceptin®) to increase the targeting of specific tumor tissues.

Ho3+ has been used during this preliminary study in order to be able to replace it with 166Ho radionuclide, emitting ‘soft’ beta(-) radiation for possible targeted radionuclide therapy.

The heating efficiency was performed using a suspension of both NPs with and without conjugation. The measurements were performed working in the frequency range of 345.5–790 kHz and varying the magnetic field amplitude up to 350 Gauss (28 kA/m) obtaining values of specific power absorption (SPA) that showed their potential as nanoheaters.

They concluded that the best results have been obtained with NPs doped with 1 % Ho3+ as nanoheaters in presence of an alternating magnetic field due to the cytotoxicity studies that have been carried out showing this platform reduced the metabolic activity of ovarian cancer cells in a dose-dependent manner. According to these results, this multimodal platform could be a candidate for medical applications, increasing their possibilities when Ho3+ is replaced by 166Ho radionuclide for simultaneous and localized irradiation in specific cancer cells which overexpress HER2 protein.

In this work, Cędrowska and co-workers reported core modification in some magnetic nanoparticles (MNPs) with α-emitter225Ac slightly modifying their magnetic properties. In the same way as last case, they conjugated covalently the particle with trastuzumab. The cytotoxic effect was also tested in-vitro toward ovarian cancer cells expressing HER2 receptor. In addition, ex-vivo biodistribution studies were carried out demonstrating their suitability for the treatment of cancer cells by intratumoral or post-resection injection due to a higher amount of particles in tumor.

The heating capacity has been also determined triggering the possibility of using this system to achieve both: active targeting and multimodal action as localized irradiator and magnetic nanheater in particular cancers.