Many experimental research procedures involve one or more series of similar tests in which one parameter is swept, while all other parameters are kept constant. These procedures demand a rigorous execution of several steps in order to maintain the assumed experimental conditions. With that in mind, nB’s team equipped software MaNIaC with the experiment mode.

The experiment is a sequence of single tests preprogramed by the user that opens a wide range of possibilities for automated sequences of tests while remarkably improving the reliability of single-sample/multiple-test procedures. In this Application Note you will ﬁnd two useful examples.

Experiment 1: [SPA vs. H] graph in one single 15-minute experiment.

The purpose of this experiment is to obtain experimental data that can be used for the graphic representation of the dependence of SPA (Specific Power Absorption) of a magnetic colloid with the strength of the applied magnetic ﬁeld in magnetic heating tests.

For that, a sample of a magnetic colloid is automatically exposed to a series of timeslots in which the applied ﬁeld stays constant within the same timeslot. And it’s increased from one timeslot to the next. The experiment was performed by setting a frequency of 831 kHz, and then increasing magnitude of the H ﬁeld, from 4 to 20 kA/m, according to the following table. 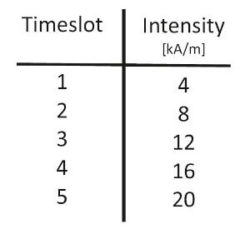 In order to make a useful comparison among all SPA values to be obtained from the experiment, it is desirable that every timeslot starts in a similar thermal condition for the sample and the instrument. That’s why in between each couple of active timeslots another timeslot with zero ﬁeld has been introduced in the sequence programmed into MaNIaC, to let the sample and the calorimeter cool down.

The full experiment took only a couple of minutes to program, and 15 minutes of execution. The following figure shows the resulting sequence of temperature vs. time curves. 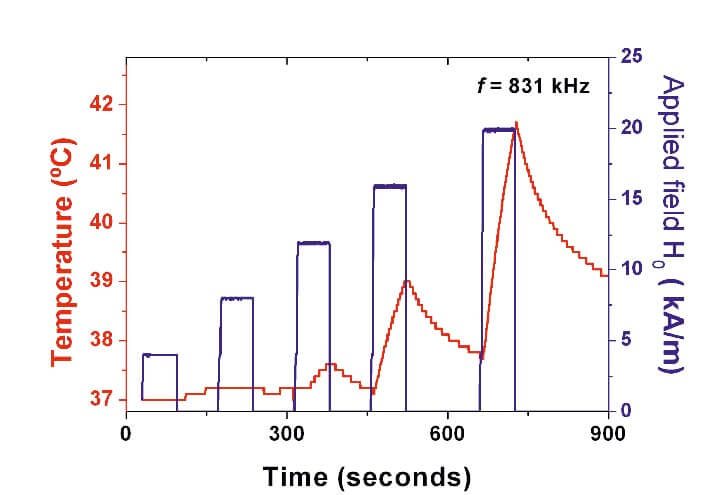 After the experiment is ﬁnished, the app ZAR is used for quickly calculate the series of Specific Power Absorption values. The resulting data is then displayed: 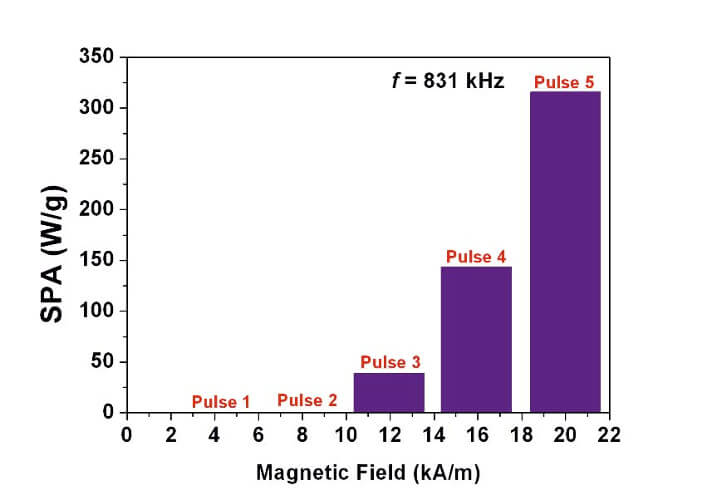 For a full repetition of the whole procedure for control means, the same experiment sequence can be re-executed with a new (or the same) sample without the need of any further programming.

Experiment 2: [SPA vs. f] graph in one single multifrequency experiment

Like in the previous example, this experiment is designed to obtain experimental data that can be used for the graphic representation of SPA’s dependence with another variable; in this case, frequency.

For this experiment, instead of a variable intensity, a frequency sweep is applied to the sample by taking advantage of the multifrequency generator built in nB’s devices. The G Drivers featured in the new D5 Series, for example, can feature up to unlimited different frequency modes, with a bandwidth of up to 2 octaves, within the 50kHz-800kHz range.

The experiment documented here was performed setting a magnitude of 20kA/m and then increasing the frequency, matching ﬁve of the available frequency modes in the device, according to the following table: 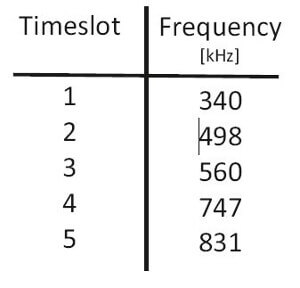 Since all the steps are executed with a high ﬁeld intensity, the temperature increase that the sample showed were higher in average than in the previous example. Consistently, the sample needed more time to cool down after each active interval, and that’s why the zero ﬁeld intervals are made longer in this experiment.

The full experiment took more than 90 minutes. It all ran automatically without the need of any monitoring from the user. The following ﬁgure show the resulting sequence of temperature vs. time curves. 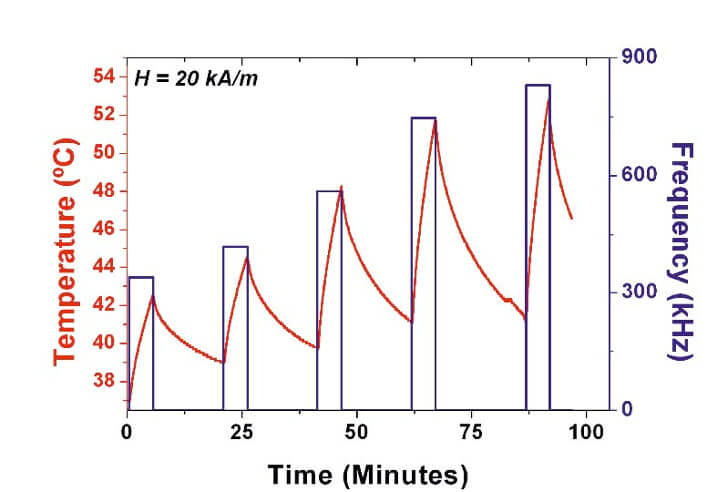 Even when the starting points are less uniform that in the previous example, ZAR can be used to quickly ﬁt the curve to a Box-Lucas model, and then reduce the error related to this situation. Thus, calculating the series of SPA values with ZAR, the resulting data is displayed here: 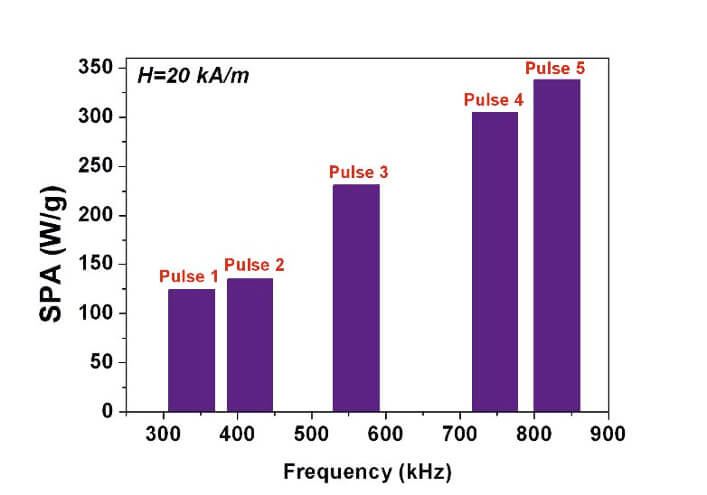 The following devices featured in the D5 Series support the experimental procedures described in this document: 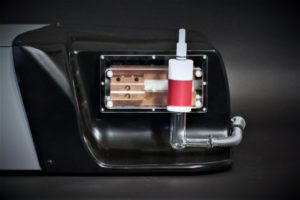 For a closer look to our products, we recommend you go to:

Made in collaboration with The Institute of Nanoscience of Aragón 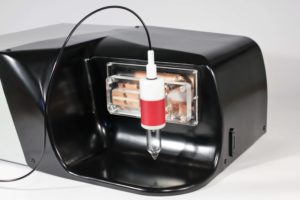 One of the first steps when characterizing any sample of magnetic nanoparticles as a heating agent is to determine its capacity of absorbing power from the applied magnetic field. Magnetic heating refers to the process of increasing the temperature of a magnetic material by the application of an alternate magnetic field (AMF). One way of characterizing the heating capability of the colloid is by means of the specific power absorption (SPA) or the intrinsic loss (ILP) values.